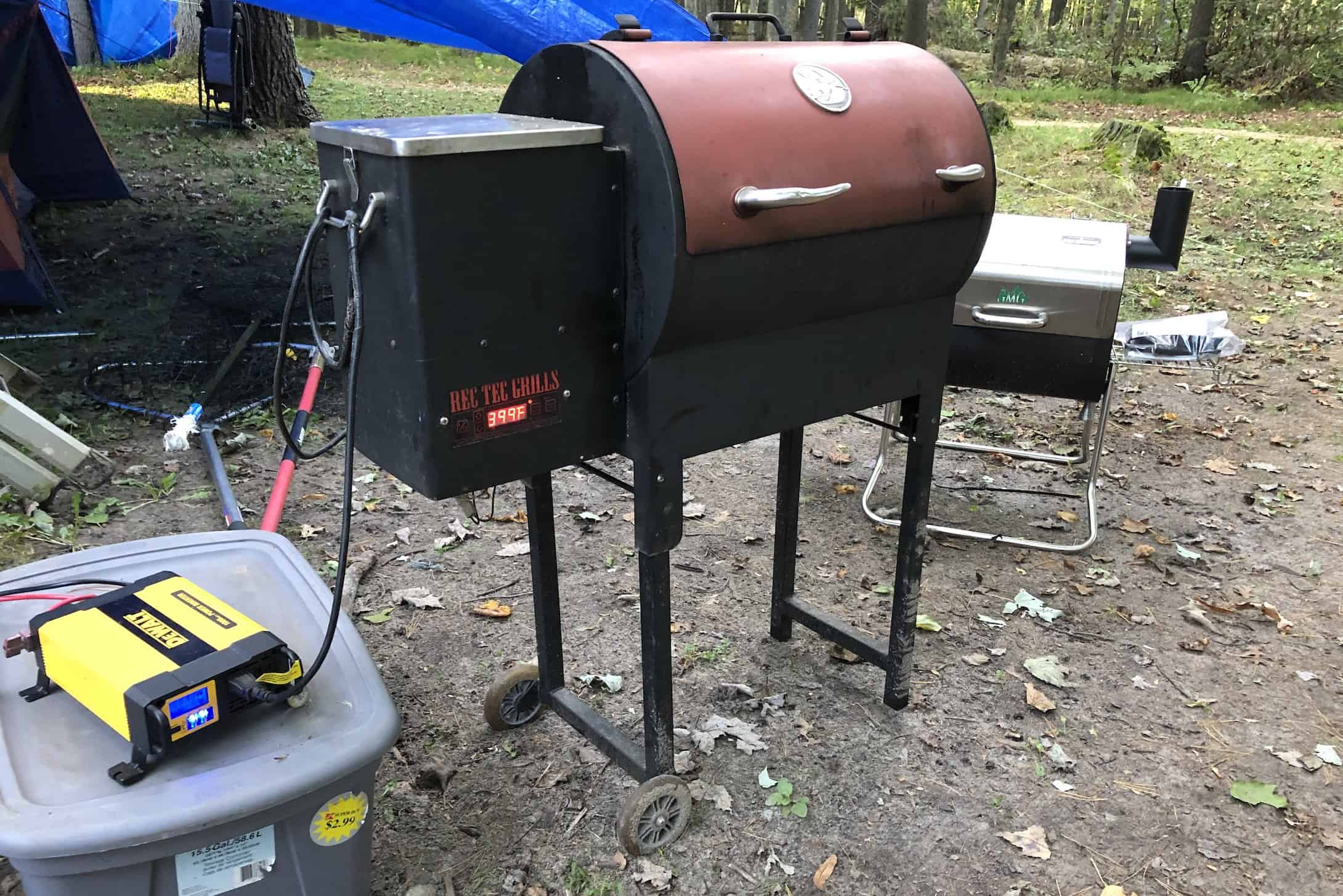 Portable power is a unique need for pellet grills. Unlike gas and charcoal grills, you need a power source to run the fan and auger. So how do you solve the power issue on the road?

If you own a pellet grill, then you definitely know the pleasure of sharing the amazing food you cook on it. A pellet grill has a distinct advantage over gas or charcoal grills in that it allows you to be social at your social gathering. No fire-tending, no flipping or checking.

But what about when you’re camping or at a tailgating? One downside to pellet grills is that they are dependent upon a power source to run the controller, auger and fan. And unless you have a portable pellet grill, you need 110V power, like a normal household outlet.

But we have a low-cost and easy to use solution to allow you to take your grill away from household outlets. For less than about $100, you’ll be able to load up your pellet grill and go literally anywhere with it. This is an especially good solution if you own a smaller portable grill like the GMG Davy Crockett or the Recteq RT-340, which folds up, rolls, and can fit in the trunk of a car.

First, let’s talk about the power needs of a pellet grill. I spoke with an electrical engineer, pored over specs for various grills and came up with the following:

The typical pellet smoker requires about 30 watts (30W) of electrical power when running, and anywhere from 300-500 watts (300-500W) for the 5-10 minutes during startup when the ignitor is running to light the pellets and the fan is running to build the fire in the fire pot. This is very different from an electric grill or smoker which have between 500-1500W continuous power requirements.

You’re going to need a power supply that can handle a short-term 500W startup need, and can then run a 30W device for at least 12 hours, more if possible. And you’ll need a way to invert the DC power from a battery to the 110V AC power the grill uses.

How Long Will my Pellet Grill Run on Portable Power?

The watts of your power source lets you know if the power source is big enough to handle the overall power needs of the grill. But it’s the Watt Hours (Wh) that’s going to give you a clue as to how long your power source will power your grill. The formula is:

500wh * 0.85 (425) / 30W = 14 hours.
Remember, though, that the startup sequence of your grill (firing up the ignitor, running the fan until set temp is reached) is going to use up some of that power. So to be safe, I’d say that unit would power the portable Recteq for 12 hours. Not bad, and plenty long enough for a tailgate of ribs, steaks, wings and whatnot. It might be a little iffy for a typical smoked pork butt, but it’s worth pre-testing if you bought one of these units.

With an inexpensive deep cycle battery, and an inverter to convert the battery DC power to AC, you can create an easy-to-use solution for portable power for right around $100. Add a nifty battery box, and you’ve got a built-in power gauge, plugs to recharge your phone, and an easier way to carry, store, and hook up the battery.

We cover each part of this solution, but first, let’s talk about some alternative solutions.

There are portable power stations available which provide a decent amount of power in one convenient form-factor. They use lithium batteries, like your laptop, and provide a good amount of power, They also provide a large variety of ways to plug in devices: 110AC, USB, USB-C, etc. in order to power everything from GoPros to small refrigerators. Their limitation for pellet grills is how long they’ll provide power.

One very well-regarded brand is Goal Zero. Their Yeti 500x claims to power a pellet grill for 9 hours. That’s fine for a few short cooks, but not enough to power your smoker for a brisket or pork butt. A solution: solar panels or a bigger power station. Maybe this works for you.

If your pockets are deep, you’ll certainly be the coolest tailgater or camper around. The Yeti 400 is around $850 $700. Larger 1000, 1400 and 2000 models push into the thousands. If you can afford it, or if you need portable power more often (they’re great for job sites), or perhaps want something that functions well for emergencies, these are very flexible power stations.

And if you want the ultimate kit, add the Goal Zero Nomad solar panel, which will fully charge the 500 in 8-12 hours. It folds up to the size of an art portfolio (think slightly smaller than a standard office easel pad). Goal Zero offers several configurations from flat and foldable to rigid.

Portable Power Stations: Be Wary of Too Little Power

Stay away from the smaller (less than 200 Wh) Portable Power Stations category if you’re looking for the most inexpensive grill-only power source. While they are great for powering laptops and electronics and even lights, they don’t have the staying power for a grill to run more than 6-10 hours. And they are basically a large battery, so once they’re depleted, they need to be recharged.

You can hook them up to a solar panel, but now we’re talking even greater expense and bulk, though you’ll certainly look cool doing it. But there’s nothing cool about the grill going down before your ribs are done. If you’re willing to spend for this incredible convenience, here’s a recommended one with a 1000W peak capacity and a very slick design, from Jackery:

You can certainly run a generator to power your pellet grill, but it’s overkill. Generators provide more than enough power and the time they can power your grill is limited only by how much fuel—gasoline—you have on hand. If you already own a generator, then by all means it might make sense to just use it. But buying one just for your grill is an unnecessary expense. The major downsides to using a generator:

Pellet Grill Shipping: What Happens After I Buy It?

If you do want to use a generator, just keep in mind the startup wattage requirements for your grill to ensure yours has ample power. Most generators should have no problem.

Generators have a come a long way recently, with models that have a small footprint (and a small gas tank) available. Models like the Champion Power generator (2000-watt) pictured should provide 10-12 hours of run-time on one fuel fill-up, which means you should be able to sleep all night in your tent as that pork butt smokes, then just refill it as necessary in the morning.

Inverters like this Ampeak 750W Power Inverter are readily available. This is the device that converts the DC power of your battery to the AC power that your pellet grill uses. It is where you’ll plug in your smoker. The inverter uses clamps to hook to the positive and negative terminals of your battery. As a bonus feature, it has 2 USB ports to charge your phone or run a Bluetooth speaker.

This small unit could also use your vehicle’s DC port (what we older folks call the “cigarette lighter”) instead of a battery, but you would run into two issues there: length of cord, and length of power. You don’t necessarily want to have to leave your vehicle running to recharge your under-hood battery as your pellet grill drains it.

An inexpensive 12V deep cycle marine battery rated at 200 minutes discharge at 23A could operate a 30W pellet barbecue for about 30 hours continuously before it has to be recharged. This is better than a gas grill on a propane tank. Plus, I feel much safer driving with a battery in my vehicle than a full propane tank. These should be available for less than $75.

A smaller, less heavy, and less expensive option would be a trolling motor battery, which would give less running time, but is easier to carry.

Note: If you don’t own a battery charger, sometimes called a “trickle charger”, you’re going to need one in order to recharge and maintain a charge in your battery. They are available for less than $20.

With a battery for power and an inverter to convert the power and give you a plug-in point for your pellet grill, all you need to do is make sure the battery is charged and you’re ready to go. A recommended option, though, is this battery box, which can make carrying and using a battery much more convenient.

Pellet grills are a great way to add to your next camping trip, tailgate, or other outdoor event. The ability to untether them from your home deck or patio is a game-changer. Hopefully you’ll spread the pellet grill love with others by loading yours up and smoking in other places.

One final bit of advice: before you go, test out your portable power kit to make sure it powers up your grill properly and that you know the approximate run time.