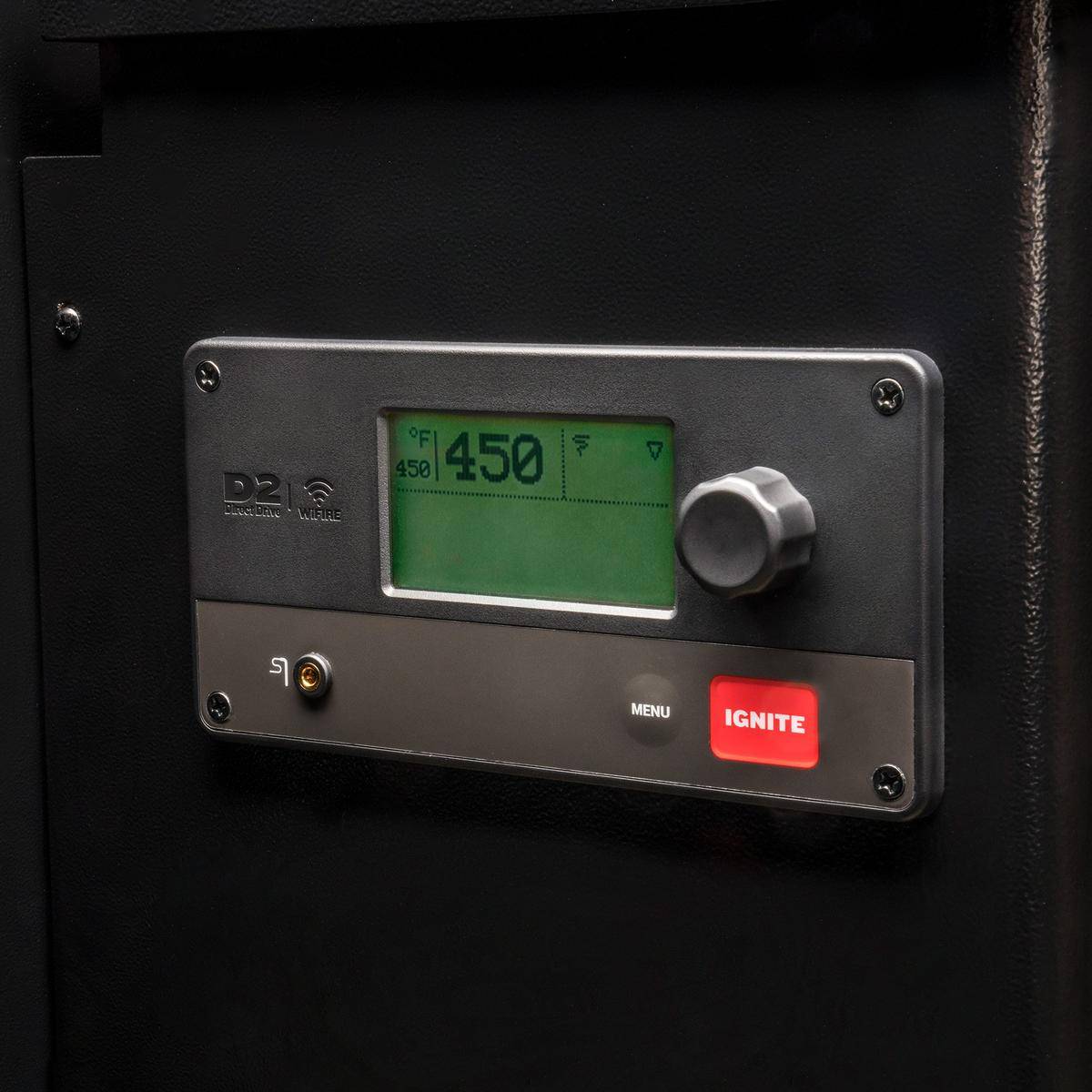 Explaining PID Controllers and Which Pellet Grills Have Them

PID Controllers are Superior to Conventional Temperature Controllers. So Which Grills Have Them?

SHORT ANSWER: MORE GRILLS HAVE PID NOW THAN EVER

All temperature controllers in a pellet grill function in basically the same way. You input a Set Point (SP) which is your desired temperature. The controller is connected to a sensor inside the cooking chamber, the RTD, which stands for Resistance Temperature Detector, but think of it as the thermometer in your grill. If the Actual Temperature (AT) as measured by the RTD is less than the Set Point, the controller controls the fuel system to raise the temperature. It does this by turning on the auger, which delivers pellets to the fire, or by speeding up or slowing down the auger, which increases or decreases the rate at which pellets are fed in to the fire. When the SP is reached, the controller either stops feeding fuel, or feeds at a rate to maintain that temperature.

Both PID controllers and conventional controllers operate on this basic principal. More wood = higher temperature. No wood = lower temperature. The fans, by the way, are just the necessary secondary fuel for combustion. They kick on and off with the pellets, in order to maintain combustion and are usually not a factor in controlling temperature, but rather in maintaining the combustion of the pellets.

Because the heating process is being controlled by pellets entering the system, all pellet grills will experience some temperatures swings up and down. After pellets are fed into the fire pot via the auger, the fire gets bigger. The temperature in the grill increases. Then the controller decreases fuel to the firepot and the temperature decreases.

A conventional non-PID controller functions like your furnace in your house. You set a temperature. If the actual temp in the grill is lower than the setpoint, as measured by the RTD, a cycle is started to begin rotating the auger, which feeds pellets into the fire pot. If the temp in the grill is higher than the setpoint, a different cycle is begun which doesn’t feed pellets to increase the temp, but feeds enough so that the fire doesn’t go out. There is a “higher than wanted” cycle and a “lower than wanted” cycle. The fan kicks on and off with these cycles in order to support the combustion needs (air) of the fuel.

Side Note: The info here can get a get bogged down in technical detail. Feel free to skim. Pit Boss has a very straightforward explanation of PID controllers in pellet grills on its site, though they don’t really explain HOW they work, just the benefits of having one. Keep reading to learn about the how.

With this method, the grill is able to maintain a temp fairly close to the Set Point, especially averaged over time. The grill will, however, go through temperature swings as it continuously overshoots and undershoots the Set Point goal. The swings might be 10, 20 or even 50 degrees. Over the length of a cook, especially a longer cook, it all averages out. Conventional controllers, then, maintain a correct average temperature that is effective.

PID Controller: Everything is Sampled More Often, and Predictions are Made

You might want to skip this section. It’s complicated. And that’s the point. A PID controller uses algorithms around its sampling with three methods. PID controllers are used in industrial processes to control temperatures, fluid flow, air pressures, etc. Just to impress you with some fancy looking math, here is the formula used to derive the amount of a manipulated variable (MV) (fuel feed rate) needed, when calculating the P (Kp), I(Ki) and D(Kd) inputs:

The Proportion part of the PID in a pellet grill is the PROPORTION of time on/off of the auger, based on needed temperature adjustments.

The INTEGRAL part controls how frequently the temperature is measured over a period of time, in order to get a more accurate spread of readings (temperatures from the RTD.)

The DERIVATIVE part is the real magic. It basically predicts the changes that will occur as well as how fast they’ll occur, to even more accurately control the temperature changes.

The above is a serious simplification of the process. The bottom line is that temperatures are maintained more accurately with a PID controller than with a conventional controller, because it is sampling more often and doing more adjustments and even predictions based on that info. What results is a more steady temp, without overshooting or undershooting the Set Point.

A conventional controller will maintain a steady 350 degrees over 30 minutes. It may swing a bit up and down, but it’s basically going to cook at an average of 350 degrees. This is fine. Your oven does this. Your furnace does this.

Where a PID controller really has advantages is when more variables occur that affect the grill’s temperature. These variables can include:

As an example, take a pellet grill with a conventional controller set to 350 on a 45 degree day. That controller was programmed with a cycle to get to 350 and to maintain 350. It was likely set to do it when the outside temp is 75 degrees. So now it’s going to run that cycle. But because of the outside temperature, it won’t reach 350.

So, it kicks in the “temp too low” cycle to adjust. The temp may now shoot to 370 or 380. Now the “temp too high” cycle kicks in. And the temp falls way faster than normal, because of the cold outside air. So it may plummet to 300, which kicks in the “temp too low” cycle again. Similar scenarios play out with very hot days/direct sun, high winds, rain, or when you put on a 10-lb Boston butt straight out of the fridge. The grill is in a constant state of trying to adjust. But its adjustments are rough, causing wild swings in temps.

A PID controller, however, is predictive, as it’s learning from how long it’s taking to adjust and applying that learning to its adjustments. It is able to more finely and accurately keep that temp at 350.

The result? Both foods will cook. One will cook at a range of 345-355. The other may hit lows of 300 and highs of 400, depending upon conditions. Not a huge deal, but it could cause cooks to be more unpredictable so that your recipe tastes differently in July than in November.

SOME PREFER CONVENTIONAL TO PID CONTROLLERS

Some people say that a conventional controller will have more smoke, as lower temps produce more smoke. So when a grill swings down to 300 from 350, it’s producing more smoke (at least temporarily). I would counter that it’s also producing less smoke when it overshoots to 390 than it was at 350.

Any pellet grill will cook tastier food, with more consistent results, than a propane grill (what most people have.) If a PID controller isn’t in your current grill, or if it’s not in your budget for a new grill, don’t worry. It still works. But a PID controller is just an even more accurate way to finely control your cooks.